The phrase ‘made by American bees’ often appears on the labels of grocery store honey. Thus began Mo’s research inquiry into the geography, politics, circulation, and transformation of this sweet cupboard staple. As it turns out, American bees don’t produce honey. The most common type of honey-making bees are Apis mellifera (The Western honeybee) and Apis cerana (The Eastern honeybee). Brought to the east coast of North America in 1622, the western honeybee now is a staple of locally-produced honey in North America. And yet, a large percentage of the US’s consumption of honey is from imports. Thus this misidentification “made by American honey bees,” propagates the isolationism of our time, and fuels the myth of domestic self-sufficiency.

A German company began working with honey bee farms in China, under the government's nose, to smuggle honey out of the country, breaking international trade law. (This particular company has been shut down, the CEO arrested, but new honey-smuggling businesses have cropped up in its place). The honey passed through Indonesia, Thailand, and Malaysia to be remarketed and sold to Western Europe, Canada, and the US, avoiding the high tariffs of Chinese products. This honey is then integrated into generic, manufactured brands and sold as American honey. We feel happy knowing that our bees made our honey. Ironically, a tourist industry funded by Western neo-liberals obsessed with aplicology supports Southeast Asia’s authentic honey machine.

The paradox here is that something so “natural” is being generated by such corrupt, exploitative, and over-consumptive practices. One only needs to scratch the surface to see the absurdity and greed woven into so many domestic and foreign policy decisions, especially those of the world's two largest economies.

Mo’s hometown Shenxi was transformed from a residential and farming community to a black pit in the earth. Farmers were relocated to cities by eminent domain (the Chinese government was in cahoots with the coal mining industry), stripped of their way of life and their means of survival. From space, the town appears to have collapsed into some type of Bardo—the coal mines produce energy and death while hovering in the inbetween. Interestingly, coal and honey’s material and alchemical processes mirror—they both crystallize, they’re both valued and diminishing resources. The cultures around coal (its “growth” via geoengineering) and honey (its connection to survival à la pollination and crop life)—each with their own neophytes, missionaries, and priests—have within them fantasies of world-building that circumnavigate the difficult trod toward sustainability.

‘[P]erhaps slowbalisation is exactly what the planet needs right now. How else to reduce the global carbon footprint, shrink economic inequality, and reorient national economies toward local growth? The world faces a number of urgent crises. Perhaps the ancients were right when they coined the phrase festina lente: more haste, less speed.’

Like the slow pour from the honey jar, Stray, Landing, Seeing Stitches yields rewards in extended-release. Utilizing a ramshackle semiotics of sculpture, the material lists are long: government documents, rubber, blown glass shaped like the various pollen molecules found in one jar of honey, the smell of orange peels, an electric radiator, rubber, a fog machine, actual honey, neon. Despite this accumulation and the instability of some of the materials, the works feel contained, independent, opaque. Here sculptural language acts as a code for political investigations hidden within the arrangements. The opacity sidesteps censorship and offers an alternative to the dangers of clear legibility. 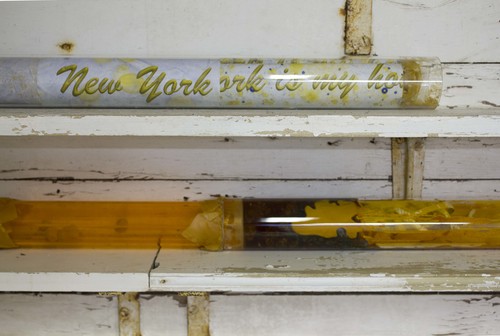