Measures, as a verb in the present tense, implies an action which relies on objectivity; He measures the width of the sill. That the window sill might be 28 inches, and even if we think about what an inch is; one-twelfth of a foot or roughly the width of a thumb, we are no longer conjuring the human form—even our own. It is our window, but its metrics are not specific to our scale. Unlike sound, which resonates differently in every space, and is heard differently by every listener, our window and its lengths are standard.

Sound travels around, and through things, it bounces off walls, swings left and surprises you. With its innate chaos, how can we understand its space and scale? Matthew gave us this Albert Ayler track Bells, to listen to—the bell on top of GERTRUDE’s timber frame had been a point of initial interest to him. There is a section in Bells, where the discordant, spiraling, improvisational saxophone gives way to a simple eight-note melody, repeated over the course of nine or ten measures, the tempo changing after every bar. The familiar descant is wedged, loudly, between a vibrating snare and an arrhythmic saxophone. This momentary perspicuity—or tune—is the looping siren puncturing a bustling city’s soundscape, within the larger, indiscernible, space of Bells.

Fragments of infrastructure are metonyms for social order. Keller Easterling tells us that infrastructure space is ‘an updating platform unfolding in time to handle new circumstances, encoding the relationships between buildings, or dictating logistics.’ (from Extrastatecraft: The Power of Infrastructure Space) This extends off the grid—and despite its supposed autonomy from cultural exchange, the forest surrounding GERTRUDE is tethered to the social, it bears the scars of human intervention—the PCBs in the sediment of the nearby Housatonic River, the invasive vines that topple whole swaths of forest— interactions with humans are inscribed in the behaviors of the landscape. Behind, and within GERTRUDE’s porous walls is a concert of entropic wood and soil engaged in their own improvisational reciprocity. I always think about how Thoreau lived in Emerson’s backyard—proof of Transcendentalism’s reliance on social infrastructure—the romance of the sublime is never neutral.

Our bell, here at GERTRUDE, is whatever we want it to be, like a window cut to our size. It’s the breakroom for the servants that used to care for the residents here, it’s the lunch bell, it’s a home for birds and spiders, it’s the school bell, it’s the church bell, it’s Pavlov’s chime. It reminds us of when sound and space were connected through the social. On Matthew’s lengths of steel, two holes allude to a remote function—they’re cleats or keys on a flute. Each section is an apparatus on which future structures depend, or by which a single measurement is made. Signifiers of function are bound up with definitive and divisible sets of numbers, and systematic language. Here, the measurements of the steel tubes have been determined by the width of Matthew’s outstretched arms, and we can imagine him carrying them, one at a time with his arms extended to their maximum span. The tubes are phrases, measures, a room poem—changing every time its performed. The hands that move them are conduits all unto themselves. 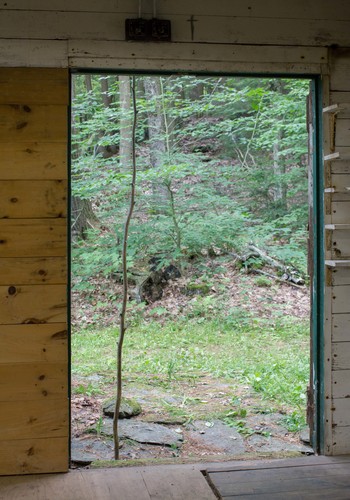 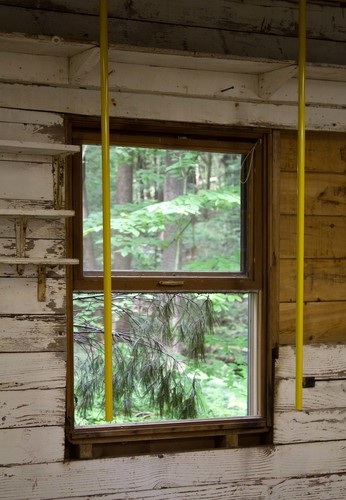